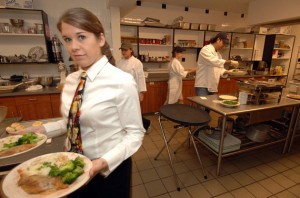 The University of Mississippi’s Department of Nutrition and Hospitality Management was chartered in the 1913-14 academic year and is taking this entire academic year to celebrate its 100th anniversary.

This year, the department has had a tent at most home football games, a cookbook launch in two cities and a 100 Years Reception at The Inn at Ole Miss.

“The atmosphere around the department has changed — everyone is in high spirits, from faculty and staff to our students,” Jeremy Roberts, adjunct professor and event management coordinator, said about the celebration of the 100th year.

The department released its second cookbook, “Are You Ready? 100 Years of Family, Friends, and Food,” earlier this year to celebrate the anniversary. The first cookbook, “Rebel Recipes,” was released in the late 1980s.

The department has changed names three times and has moved under various schools over the years. It is currently one of the largest departments in the university’s School of Applied Sciences and one of the fastest-growing academic units at The University of Mississippi. In the past five years, the department has nearly tripled in size, with currently 550 undergraduate and 25 graduate students as of 2013.

Every year during the fall and spring semesters, seniors have an opportunity to participate in the department’s student-run restaurant, Lenoir Dining. This is a part of a course that senior-level hospitality management and nutrition majors can take, called Quantity Food Production and Service. Ole Miss students, faculty and staff can purchase lunch or dinner at Lenoir Dining on Tuesdays and Thursdays for $7. General public can purchase it for $10. The meal includes a beverage, freshly baked bread, an appetizer, an entree and a dessert.

“We will continue to strengthen our existing programs and look for new opportunities for our students — including the expansion of our master’s degree program and possible new Ph.D. program,” said Kathy Knight, interim chair of the Department of Nutrition and Hospitality Management.

From 5-9 p.m. on Dec. 5, the department will end the fall semester with its largest fundraiser of the year, Square Toast for Scholarships, a food and wine tasting at the historic Oxford Square.

More fundraisers will be held during the spring semester. On April 3 Miss-I-Sippin’, a beer and food tasting, will be held to benefit arts and education. On April 26 the department will be at Square Fair as a part of the Double Decker Arts Festival.